London based street artist, ATM, has a lifelong love for nature and a particular connection to birds, their songs, calls and habitats. ATM uses his skills as an artist to celebrate the beauty of birds and communicate the extinction crisis, and his giant wildlife murals fill walls from London to Bristol and on to Poland and Norway. In this blog we asked ATM a few questions about his inspiring work.

I love painting on a large scale, in the open air, using colours that will be striking from distance. I love the natural world and want to celebrate and draw attention to it.

So I paint endangered species on urban walls, as a way to make an encounter with these creatures, or rather an image of them, unavoidable. I want to draw attention to what has been lost, which in our modern urban world, led by technology and social media, can so easily be ignored. Many people are simply unaware of the massive declines in so many of our native creatures. This includes iconic species that form such an integral part of our culture and history. Birds such as nightingales and turtle doves, celebrated in literature and folklore for centuries, are at serious risk of disappearing from our shores forever. I see this as tragedy and my work attempts to rekindle a love and appreciation for these birds by bringing huge images of them into the urban environment to reach as wide an audience as possible.

Street art is the ideal medium for this, as it reaches people of every class and social status and offers an antidote to the ubiquitous commercial advertising that none of us ask for, which sells an idea of individual acquisition as a route to freedom and happiness. How much more beneficial would it be to promote an ideal of communal environmental health and abundance, which would also directly improve our individual health and wellbeing? The painted birds are a symbol of this ambition.

It is for this reason that I show creatures that have a specific connection to the location in which they’re painted. I paint birds that once would have lived where the tarmac now covers their streams, water meadows and hedges; insects where once flower-rich meadows, free of pesticides, supported whole ecosystems.

This acts as a reminder of what we have lost, but also a recognition that with habitat restoration and wise planning, some could return. It is with local initiatives that we can have most impact, where even small improvements and changes can have dramatic effects, especially when repeated on a large scale. 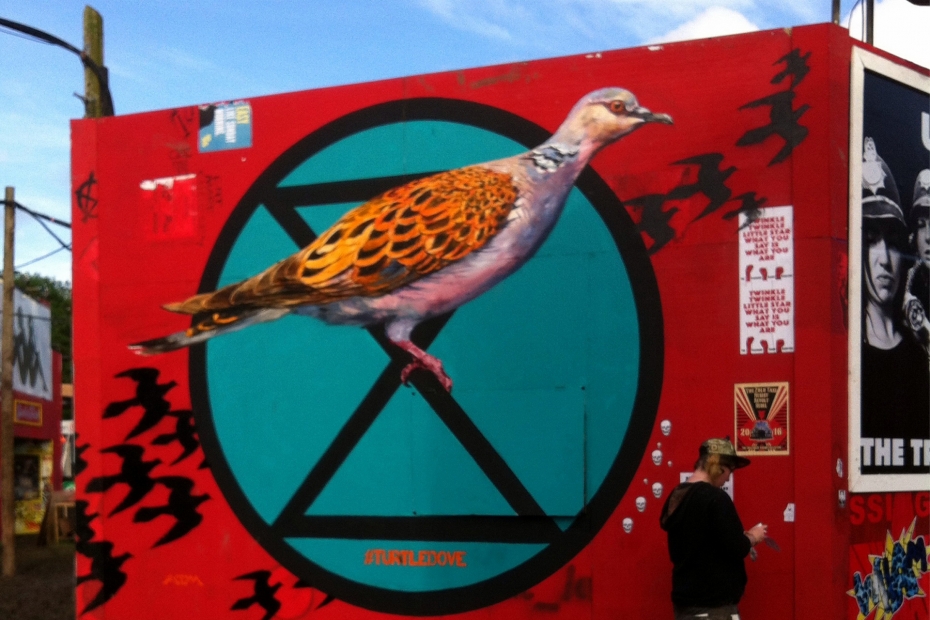 2. What are you working on at the moment?

I am currently making designs for several murals, two in a London park that will feature the invertebrates found there and their habitats, including the plants and flowers, on which they depend. I will also be working on a series in Portsmouth and Southampton showing the ‘Secrets of the Solent’, some of the vast array of marine life which is mostly hidden beneath the waves and thus even more mysterious and unknown. 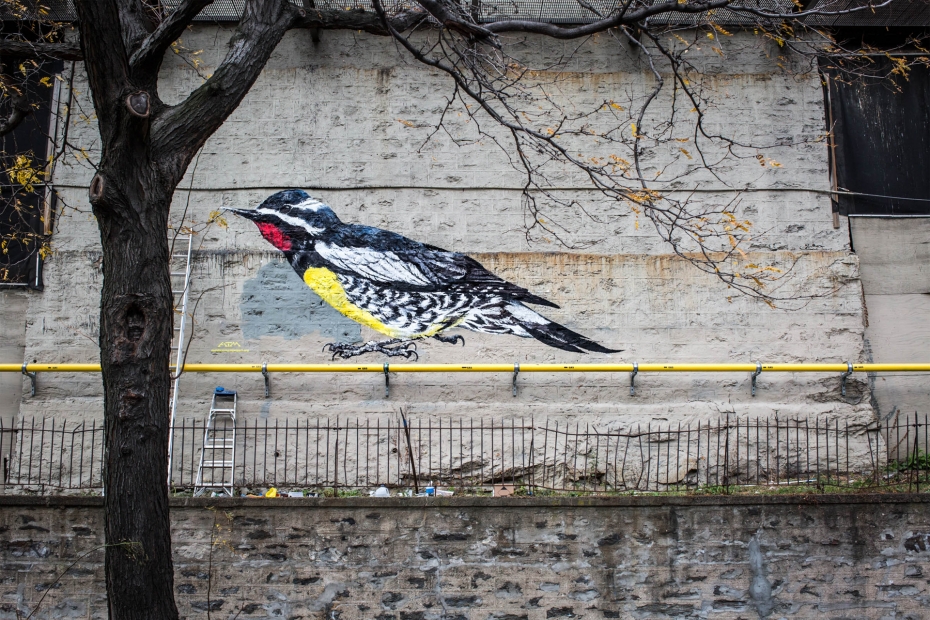 3. What has been your favourite project?

I have several favourite projects, one that springs to mind is painting the hen harrier on an isolated WWII pillbox on the Isle of Sheppey, over which the harriers migrate on their way to Northern grouse moors. While I was working in the sun and strong wind coming from the sea, the air was full of the calls of redshanks, oystercatchers and curlews.

Another was the Goshawk on the edge of Walthamstow marshes, where goshawks could surely live, if they were given half a chance. The nearby mural of Walthamstow Wetlands, showing seven bird species that can be found there, is a celebration of what can be achieved, in this case the creation of the largest urban wetland in Europe. My trip to New York, to paint three murals of birds affected by climate change, for the Audubon Mural Project, was also a highlight. 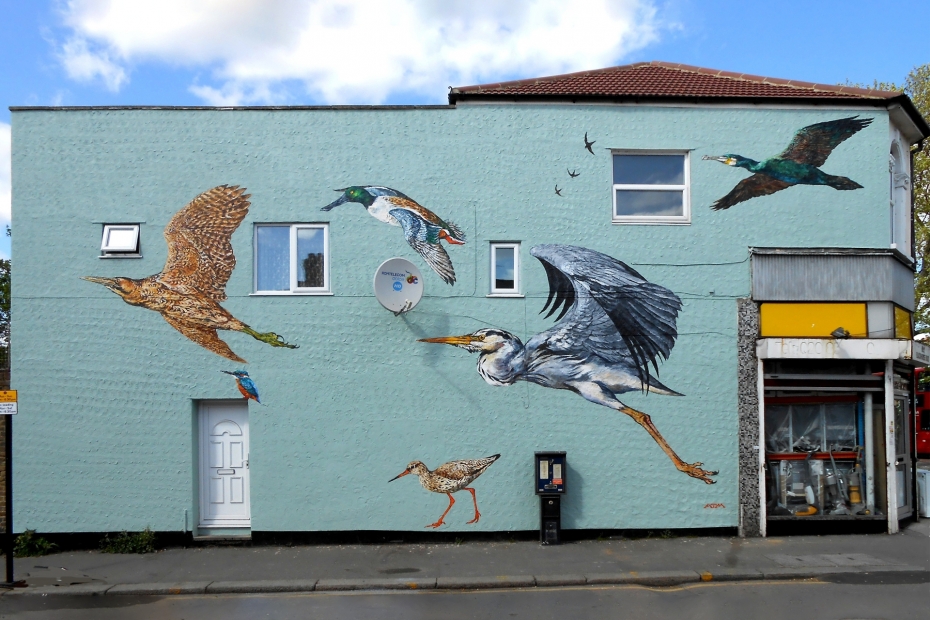 4. If you could paint anything, anywhere, what would it be and why?

One of the great advantages of painting on walls, from the artistic perspective, is that each surface is entirely unique and presents different problems to solve and opportunities to exploit. They have different shapes and relationships to adjoining buildings, different angles to the sun, different textures and colours. Unlike the predictability of working on canvas, each one is a new adventure. There might be windows, doorways, satellite dishes, or bus stops in the way, around which the painting has to fit. A brick wall might be crumbly or sound, richly varied in colour or monotonous, neatly pointed or pitted and three dimensional. The wall might be smoothly rendered or deeply textured like pebbledash and artex.

All of these surfaces offer the chance to try new techniques of layering colour, stippling, or free-flowing strokes.

Each wall suggests certain subjects when I see it. A lot of my inspiration comes from the wall itself and what it might embody, what I can imagine moving across it. My next favourite wall and what I might paint on it very much depends on this encounter and what it sparks in my imagination. 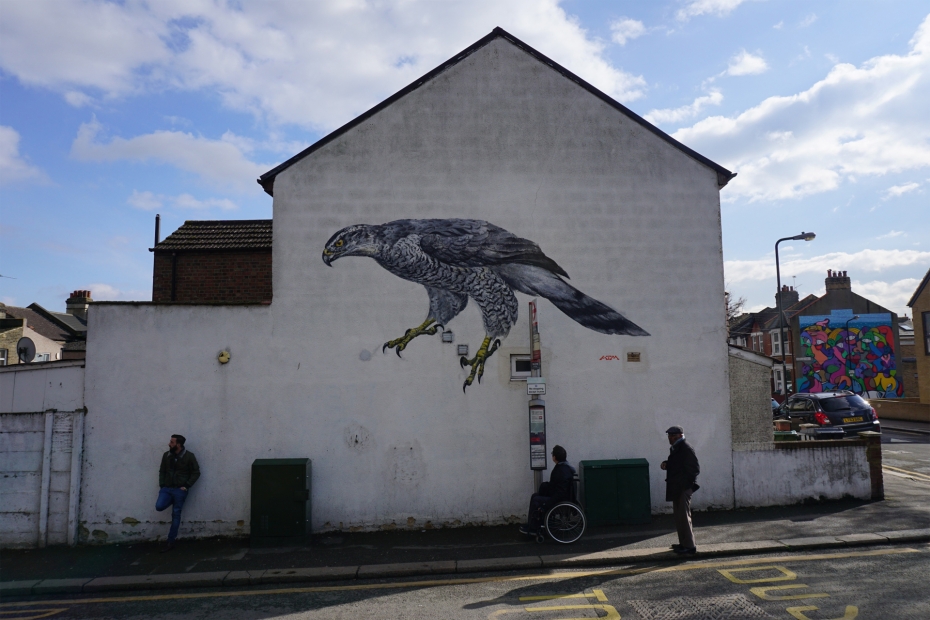