July into August can be a very productive time for butterflies, with some iconic species to be found fluttering around the country. By Chris Griffin.

If you are, like me, primarily interested in birds, July can sometimes feel a relatively quiet time of year. Many species hide away at this time as they continue to incubate eggs or raise chicks, perhaps even on a second brood. Migration has all but stopped apart from the occasional unusual visitor like the Lammergeier that has currently taken up temporary residence in the Derby Dales.

But this doesn’t mean there aren’t amazing wildlife experiences to be had. July into August can be a very productive time for butterflies, with some iconic species to be found fluttering around the country. The UK has 59 regularly occurring butterflies, 57 of which breed and 2 migrate to our shores every year – the Painted Lady and Clouded Yellow.

Walking through a hay meadow at the moment can truly be an astonishing sight with clouds of Meadow Browns, Ringlets and, if you are lucky, Marbled Whites filling the air. Taking a stroll down to your local woods might provide the opportunity to discover Sliver-washed Fritillary or White Admiral nectaring on bramble flowers.

Here are my top 10 species of butterflies to look out for and where to find them at the moment. 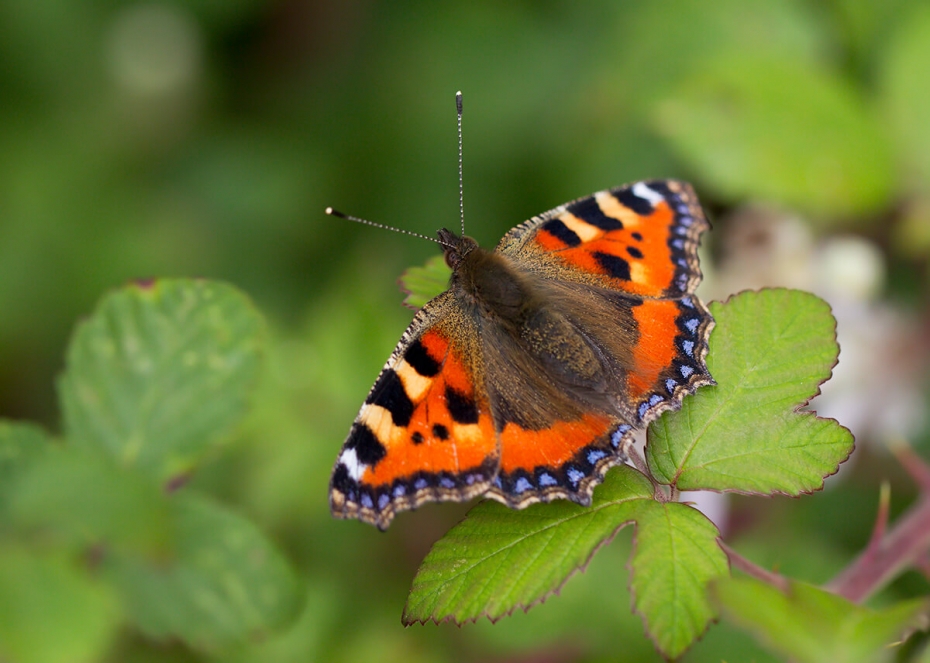 With its blazing orange wings bordered with iridescent blue pearls, there can be no doubt that the Small Tortoishell is one of the most stunning butterflies we see in the UK. Where to find them: Gardens, parks and the wider countryside… everywhere basically! 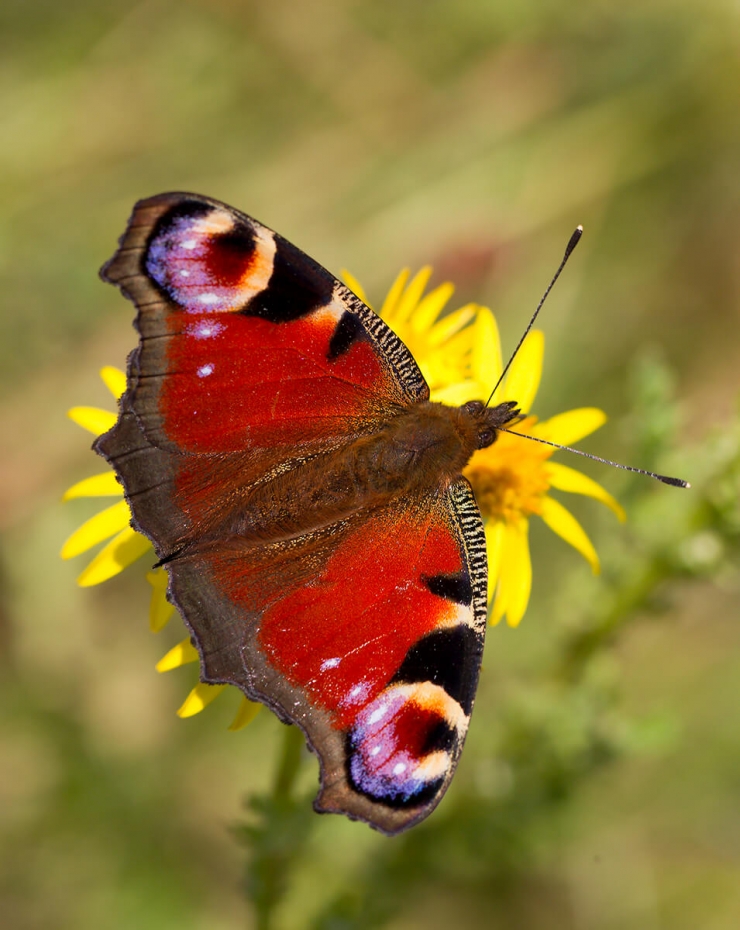 Perhaps the most easily recognised and best-known in the UK, it’s ‘eye-spot’ markings on the upper-wings are what gives this beautiful species its common name and are used as a defence mechanism to deter predators. Where to find them: Pretty much anywhere but shaded woodland glades and clearings are especially good places to look. 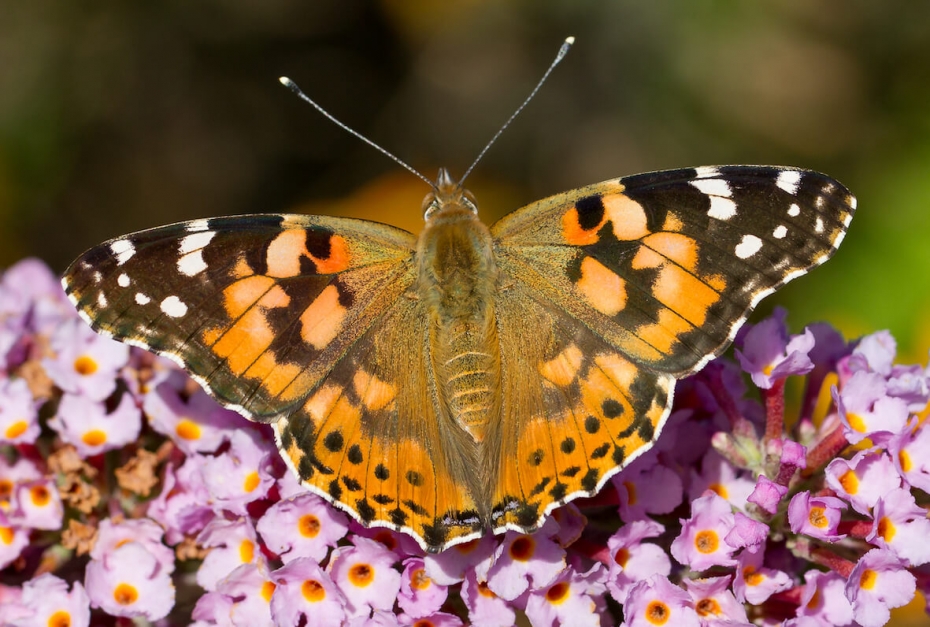 This nomadic butterfly migrates to the UK from the desert fringes of North Africa, the Middle East and Asia each year. It occasionally has ‘irruption years’ where numbers can reach into the millions and hundreds can be seen flying together. Where to find them: Painted Lady prefer dry, open areas like heathlands and hay meadows, but can quite happily be seen in gardens and parks too. 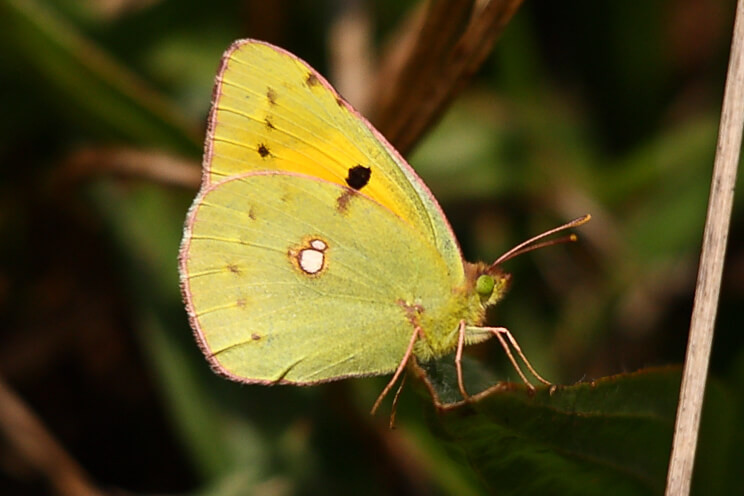 Another migrant, the Clouded Yellow brings a real splash of colour to the summer. Where to find them: Prefers hay meadows and unimproved chalk grasslands, especially on the coast. 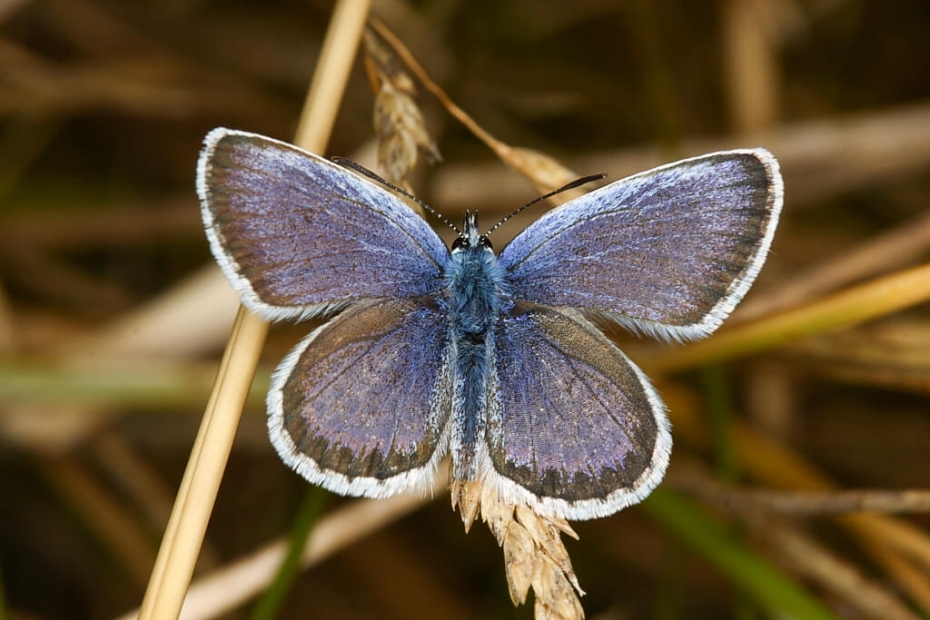 Unfortunately now a rare butterfly, seeing a silvery-blue male flit across a heathland is a really exciting moment. They get their name from the silver metallic spots on the underwing which is a diagnostic feature. Where to find them: Mostly found on heathlands in Cornwall, Dorset and Hampshire, but some colonies can be found in Wales, East Anglia and at my old stomping ground, Prees Heath in Shropshire. 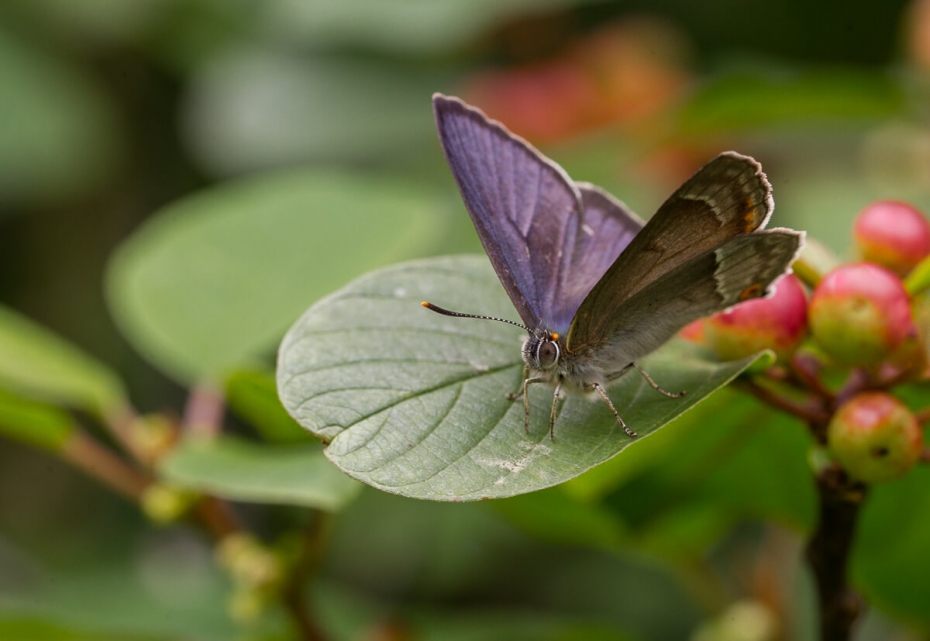 A widespread, but often overlooked butterfly. It can look plain brown on the upper-wing but as the angle of the light changes, it reveals a stunning intensely purple sheen. It spends a lot of its time up at the very tops of oak trees, but can come lower down to nectar, especially in years of drought. Where to find them: Anywhere with good stands of oak trees. Alners Gorse in Dorset is one of my favourite places to see them and sometimes at eye-level! 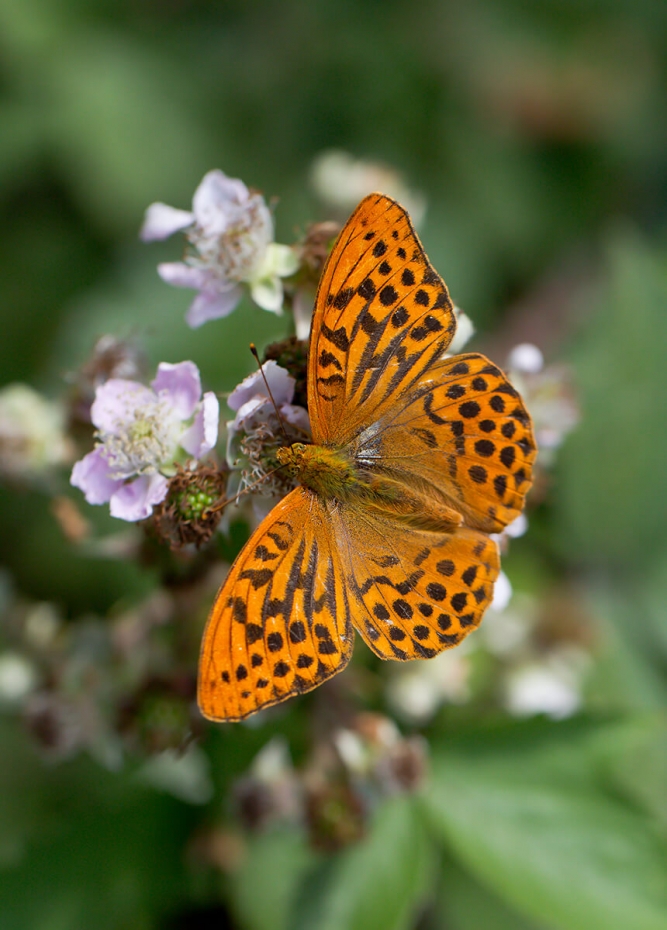 With an intricate pattern of black spots and tiger stripes they are a wonderful butterfly to watch, and can often be found feeding together in large numbers. Where to find them: In the South of England up to the Midlands, these can be found flying up broadleaved woodland rides and clearings. Often uses bramble to nectar. 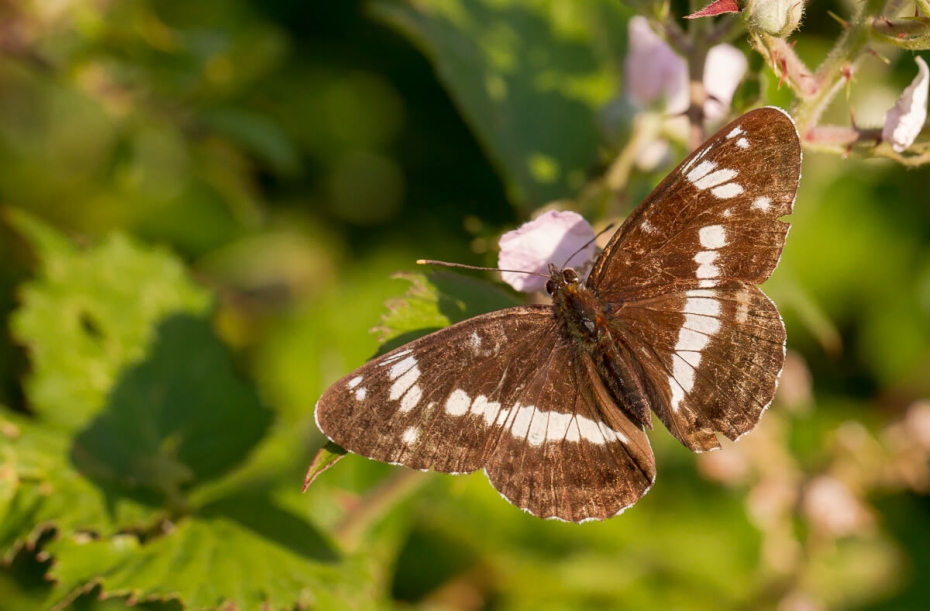 There is nothing quite like watching one of these black and white jewels drifting delicately around the tree tops in a Southern England woodland. They spread into the UK in the 1920s but have suffered quite a decline in the last decade so getting to find one is a real treat. Where to find them: Often found nectaring side by side with Silver-washed Fritillary on brambles, within broadleaved woodland. Shade-tolerant, so can quite happily be found in more enclosed areas. 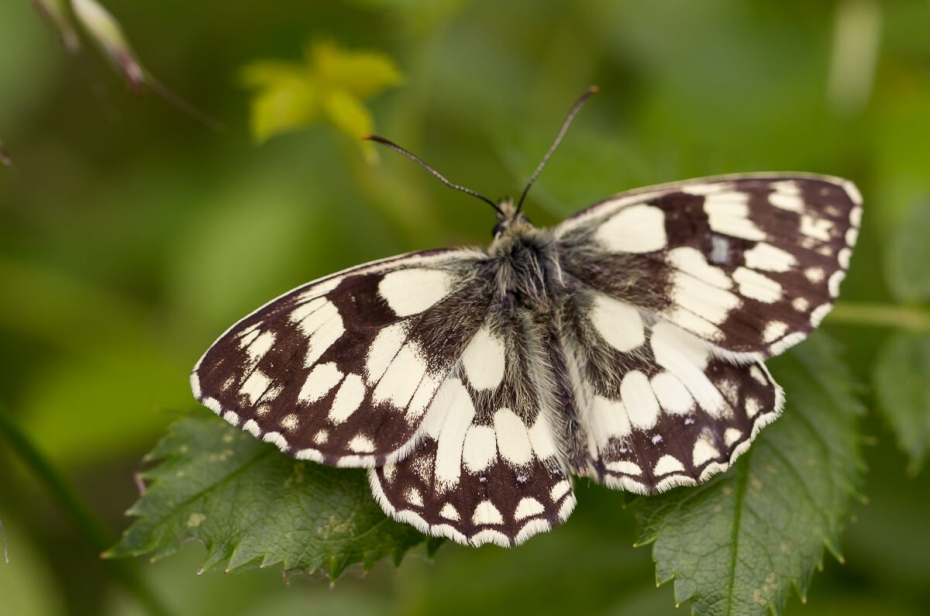 My personal favourite, the Marbled White is quite possibly the most wonderful butterfly to watch as they gracefully dance across the wild hay meadows in Southern England. They are unmistakable with their stunning black and white ‘chequerboard’ patterning. Where to find them: Mostly found across unimproved grasslands with well grown and tall grasses, especially chalk and limestone grasslands. Can also be found on woodland edges, roadside verges and farmland. 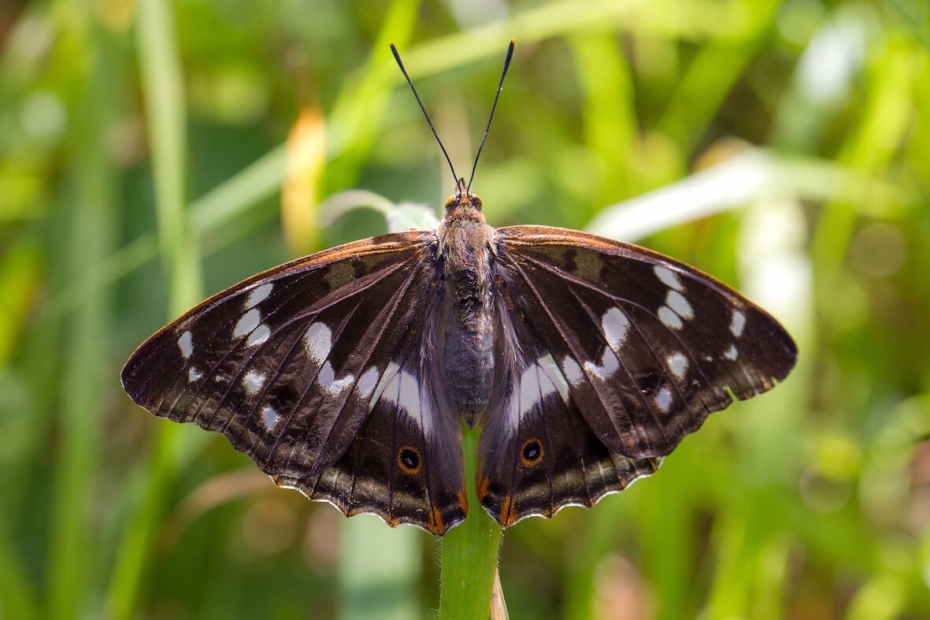 Also known as ‘His Imperial Majesty’ by enthusiasts, the Purple Emperor must be the jewel in the UK’s butterfly crown. Its range is restricted to the South and South-East of England, but perhaps under-recorded as it mostly keeps to the highest boughs of the tallest oak trees. It does come down to feed on the ground though, obtaining salts from decomposing material, where it’s true beauty can really be appreciated. Where to find them: Restricted to large broadleaved woodlands in Southern England. Some very good sites are in the South like Fermyn Woods, Northamptonshire and Southwater Woods, West Sussex. Perhaps the best known site is the Knepp Estate in West Sussex where old farmland has been rewilded in an ambitious and outstanding project. Numbers of Purple Emperors here are outstanding with the added bonus of Nightingale and Turtle Dove in the area too.

Birding from the balcony: Our world out the window