Cape May is a Mecca for birders, especially those interested in migration. In Autumn, Cape May represents one of the best locations in the world to witness visible migration of songbirds, raptors, and waterbirds, a spectacle that peaks in September and October after most of the summer vacationers have left this seaside resort town. Since 1976 the Cape May Bird Observatory has been responsible for counting the birds and butterflies that migrate over, around, and through Cape May.

To this day we run three autumn bird counts and one butterfly count: the Cape May Hawk Watch (since 1976), the Monarch Monitoring Project (since 1989) the Avalon Seawatch (since 1993) and the Morning Flight Songbird Count (since 2005). While it’s safe to say that autumn migration in Cape May is king, like every great place, Cape May still harbors some best-kept secrets…until now, at least. Last year, local hotshot birders and seasoned autumn migration counters Tom Reed and Glen Davis decided to count the birds visibly migrating around Cape May during spring. Not just one day, but every day, and not just from anywhere, but from one of the Cape May Point dune crossovers, affording them a sweeping view of the Delaware Bay and allowing them to count birds both leaving the bay (heading east) and entering it (heading west).

While Tom can be found counting birds nearly every day, he and Glen have assembled a team of volunteers to assist in the counts on various days (I have committed to help count on Mondays, and any other rare morning when I find myself free for a few hours before work). The count typically runs from just before sunrise until at least two hours after. Continuing to count later into the day is determined by counter availability and size of the migration event.

While high counts are interesting, they don’t tell us much about the species when taken in isolation. Rather it’s the accumulation of daily counts, and notation of migration direction, that begin to paint the picture of the status and distribution of these birds. Take Common and Red-throated Loon for example. Common Loon breed on freshwater lakes and ponds throughout the North Woods and Boreal zones, as well as some beyond on the Arctic tundra, whereas Red-throated Loons breed farther north, across the Alaskan tundra and coastal plains of Alaska and Canada. In spring, as birds move north, our observations at Springwatch are demonstrating the clear distinction in migration patterns between these two species, with Common Loon heading primarily “up bay” or northwest, and Red-throated Loon heading mainly “up coast” or east out of the bay, turning north once over the Atlantic. So not only has the Springwatch crew tallied more individual Common Loons in single day counts than ever before (previous record was 86; during the week of 4/22 we have tallied 129 and 364 on two separate days), they have also documented the seasonal divergence in flight direction that characterize these two species, data which can later be used in developing smart conservation strategies for both species. But this is only the tip of the iceberg, and we fully expect to uncover many more life history stories of the birds that migrate over Cape May as spring unfolds before us.

In the meantime, Tom and the rest of the crew will affix their spotting scopes to the horizon, and revel in the newly charted territory that is spring migration in Cape May. 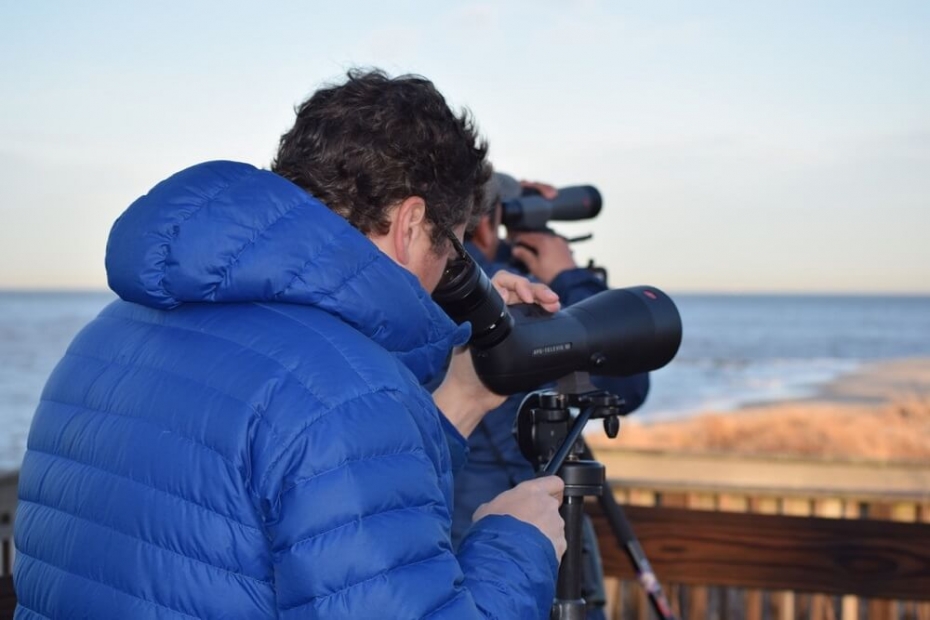 Check out David’s personal blog here. To learn more about Cape May Bird Observatory, check out their website or connect with them on Facebook.